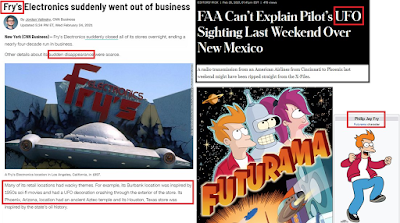 Fry's Electronics closed all its stores abruptly overnight. This happened only a few days after pilots on American Airlines flight 2292 reported a cigar-shaped UFO flying above them at 1:19PM CST over New Mexico on Sunday February 21, 2021.

NOTE: Fry's is famous for its store in California with a giant UFO breaking out of the side of the building. 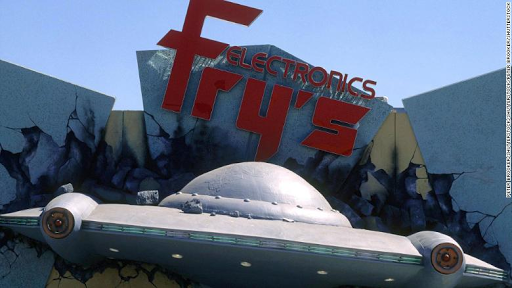 Per the news article: "Other details about its sudden disappearance were scarce."

I bought my laptop from a local Fry's store about a year ago. And I remember how the store's logo always made me think of the character Fry from Futurama. 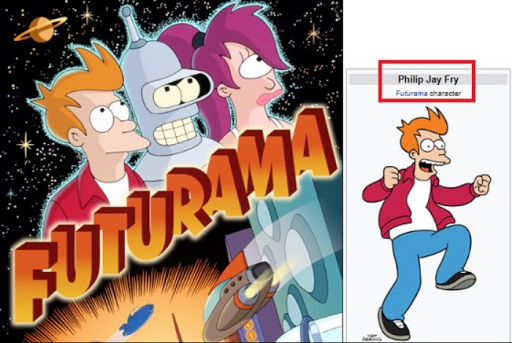 But I was today years old when I found out Fry's Electronics had an actual UFO-themed store. Egads!

I have a theory about things "suddenly disappearing". Since we live in an archetypal reality (as sync proves), abrupt changes in our reality can occur due to major shifts in archetypal energy projection due to As Above/So Below.

Or when new concepts enter and are accepted energetically into the Collective Consciousness.

In this case it's the idea of UFOs solidifying.

Perhaps suggesting that since real UFOs are emerging then the fake ones are disappearing?

Pretty much exactly what Phillip K. Dick said would happen:

***Further clarification: Our Collective Subconscious does NOT speak English. It communicates in symbols and images (similar to the way Bumblebee speaks through the radio on the Transformers movies).

So, for example, if it wanted to say "Alert! UFOs are here!" it might show us images of things we collectively associate with UFOs (like Fry's Electronics and Fry from Futurama) along with a 119/911 time tag on the actual event to signify emergency importance.