9/11 Foreshadowing in Cosby's 'A Different World'

Last week I discovered one of my favorite old TV shows A Different World on Netflix. The infamous Cosby Show spinoff was a staple of my childhood and motivated a lot of young people to attend college.

But what started out as a true '80's freak-out, geek-out moment replete with my goofy grin and shrieks of delight as I clicked the play button, quickly turned into a study in synchromysticism and 9/11 foreshadowing.


Much of the first season's action takes places in the dorm room Jaleesa shares with the show's star Denise Huxtable (played by Lisa Bonet). During the episodes their room number inexplicably changes from 20 Y to 201. If, hypothetically, Y=Year, then substituting Y for 01 gives 2001. 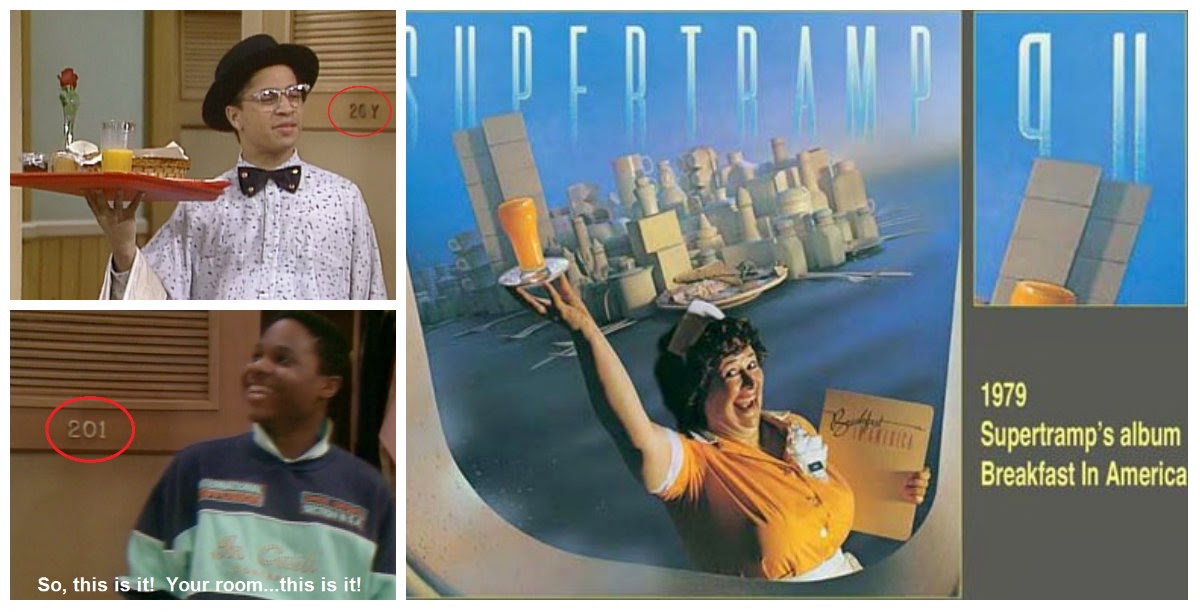 Seasons 1-3 have a running theme of challenging male versus female gender roles and stereotypes. They also contain repetitive usage of airplane and plane crash imagery.

In a debate on whether women should be equal to men in the workplace, Whitley Gilbert (played by Jasmine Guy) uses the jarring analogy of a female air traffic controller causing two planes to crash in mid-air to exemplify the dangers of letting women take on typically male jobs.

Later in the series she eventually grows to accept more feminist views. 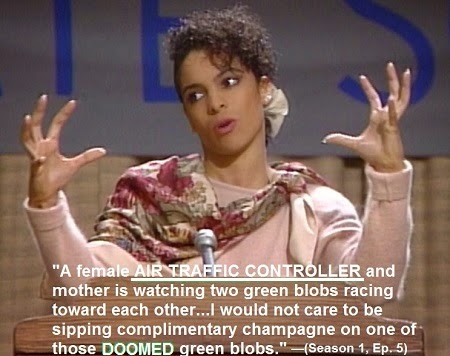 Similarly, Dwayne Wayne's character (played by Kadeem Hardison) undergoes a full alchemical metamorphosis on screen. He starts out in the role of a narrow-minded guy doggedly pursuing and viewing every woman he meets as strictly sexual objects.

But later we see him first struggling with then finally embracing his role as a "Miss Hillman" contestant and championing non-sexist treatment of women. 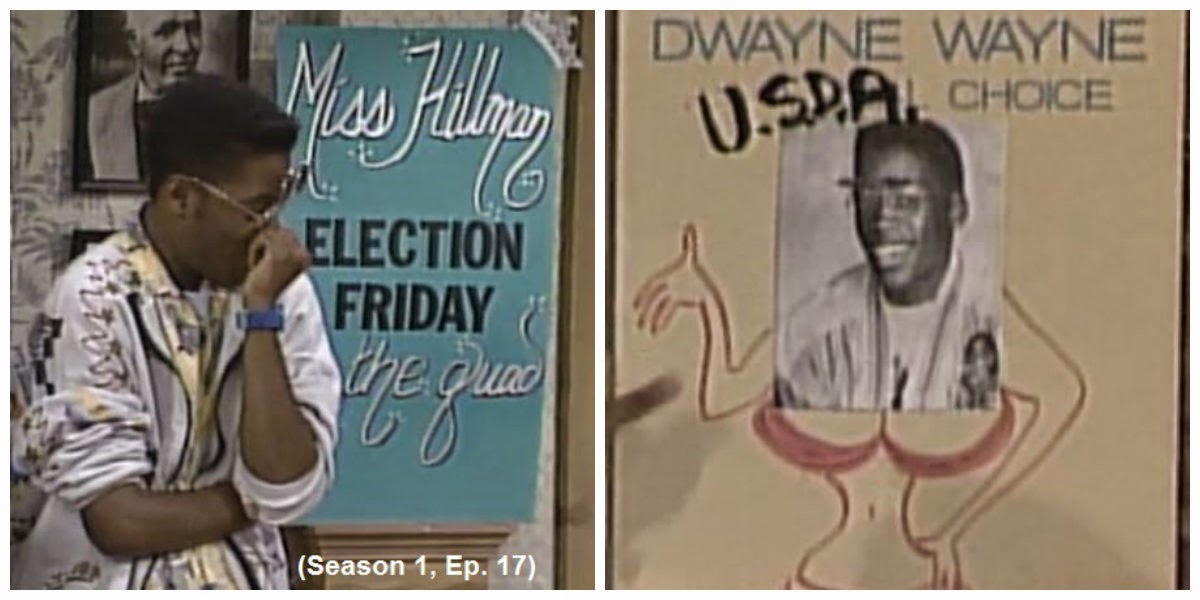 Thus, both Dwayne and Whitley move toward the hieros gamos, the merging of their masculine and feminine sides. Psychologically, this is reflected in Jung's concept of individuation through the integration of the Anima and the Animus. It can also be found in the Gnostic premise of the "two becoming one".

In Season 2, the actual date of September 11th is mentioned in a scene recounting examples of Dwayne's worst college antics as he hangs his head in shame. 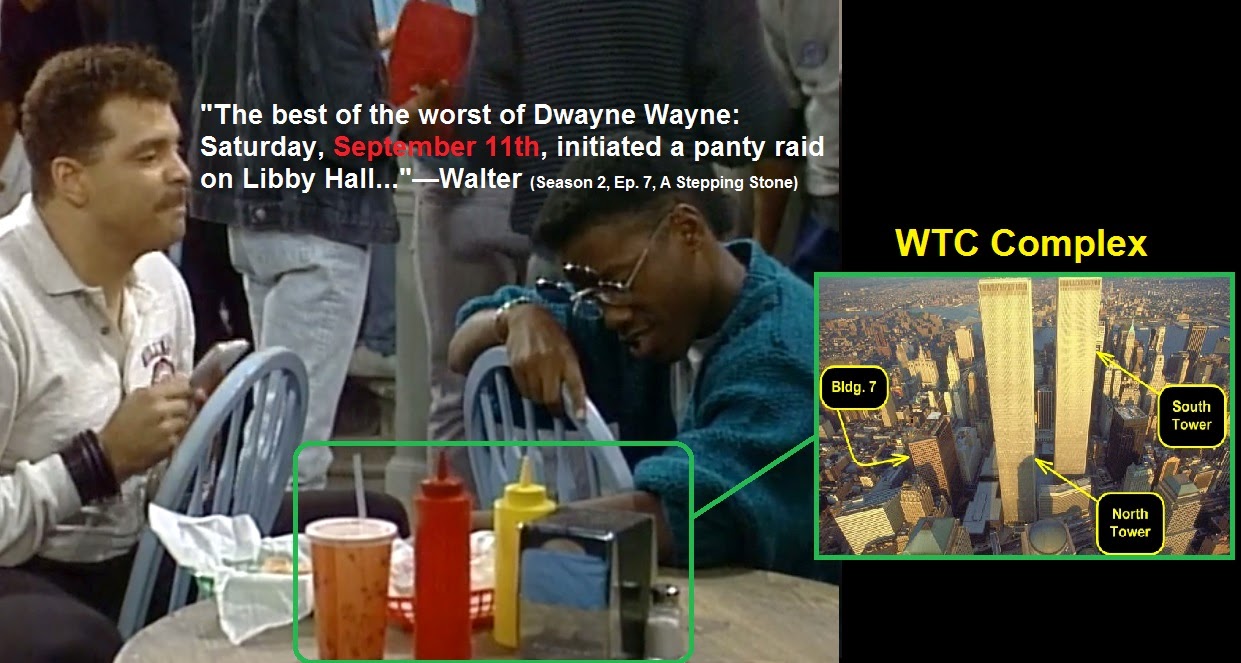 Notice in the above scene that Walter accuses Dwayne of initiating a September 11th panty raid on LIBBY Hall.

This is another sync to Supertramp's Breakfast in America album. The waitress on the album cover is named Libby, a nickname for Lady Liberty a.k.a. The Statue of Liberty.


In Season 2, Episode 14, aptly entitled "Breaking Up Is Hard to Do", Dwayne attempts to consummate his new state of enlightenment by giving a ring to his girlfriend, a kind of divine marriage.

But when she rejects him, he angrily declares himself "the pilot" and threatens, "Either we fly UNITED, or we fly solo".

United Airlines Flights 175 and 93 were both involved in the September 11th attacks.

Now Dwayne Wayne is clearly identified as symbolizing a pilot who raided our liberty on 9/11. But the fact of the matter is that his signature flip-up glasses identified him as "The Pilot" all along.
He was also often dressed in aviator bomber jackets and shirts covered with airplanes, flying pigs, and other symbols. Note: In the episode "Strangers on a Plane" (pictured above) Dwayne is assigned seat 4D (=44) but moves to sit with Whitley in seat 2C (=23). Read the recent post from The Sync Whole about the '23 enigma' and frequent references to a "Flight 23" in TV shows and movies like Star Trek and The Twilight Zone.


The first episode of A Different World aired in September 1987, fourteen years before 9/11/2001. This brings to mind many of the usual questions encountered when dealing with synchronicity:


As always, the answers can be quite subjective and you must determine them for yourself.  This particular brand of pop culture alchemy is far from unique.

9/11 foreshadowing has been pointed out in a host of other movies and television shows, including The Simpsons, The Lone Gunman, Trading Places, Back to the Future, The Big Lebowski, and Double Indemnity.

The Takeaway: Don't let this info ruin your enjoyment of what, in my opinion, was one of the best TV shows of the late '80's and early '90's. However, do understand that EVERYTHING has multiple layers of context. To think otherwise is to handicap yourself to the nature of the reality in which we live.