Norway and The Big Lebowski 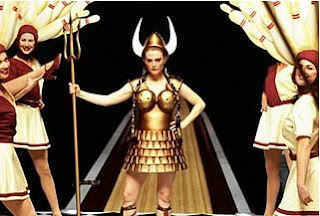 Surprisingly, the movie 'The Big Lebowski' syncs to the recent Norway massacre.

For those who may not know, TBL is famous in the Syncosphere for its many Jesus references as well as several scenes that seem to have predicted 9/11 (for more info see William Morgan's video Man In the Mirror).

Further Norway syncs entrain through the characters of Maude (played by Julianne Moore) and Bunny Lebowski (played by Tara Reid).

The following video clip is a dream sequence from the film with Maude dressed as a Norse Viking goddess.


Toward the end of the movie a private investigator reveals that Bunny Lebowski is really Fawn Knutsen, a teen runaway from Moorhead, Minnesota.

Knutsen is a Norwegian surname.  Moorhead, MN is located in the Red River Valley, an area known for its strong Norwegian heritage.

It's also the site of some of the flattest, richest FARMland in the whole world. 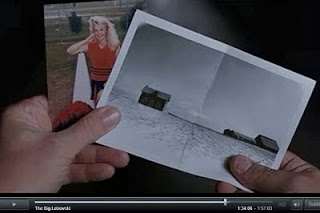 In the movie scene (above) a photo of the Knutsen family FARM is shown.

Bunny a.k.a Fawn is also seen wearing the Orange and Black school colors of The Moorhead Spuds.


Breivik's FARM (where he hid the explosives used in the bombing) is located in the county of Hedmark in Aamot, Norway.


The words Moor and Mark can both be used as verbs meaning "to fix" when related to a ship.

How's that for Synchromystic foreshadowing?

Another sync exists between Moorhead and the name of actress Julianne Moore.  The name Julianne means "son of Jove/Jupiter".

In this context, Moore/Moorhead suggests a return to the Godhead symbolized by the planet Jupiter (Thanks to Eleleth at the Cosmos Idikos blog for this wisdom). 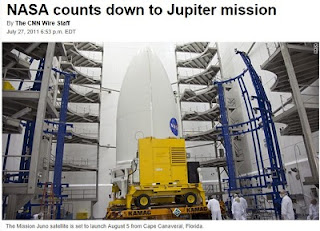 It is a timely reference since NASA's Juno space probe will be travelling to Jupiter next week on 8/05.

There was also a FARM-related Tweet on July 28th from William Morgan (@satoriallme on Twitter) that helped pull things together for me.

The Farm symbolizes our relationship with the feminine aspect of the Earth.  Bunny a.k.a Fawn KNUTsen resonates the Egyptian sky goddess NUT whose husband is the Earth god Geb.

In a world ruled by Love our relationship with the Earth Mother energy would be symbiotic.  We would cherish her and she would nourish and sustain us, forever.

In one final sync-related note, actress Tara Reid was often compared to late singer Amy Winehouse in the media due to her very public battle with Alcoholism. 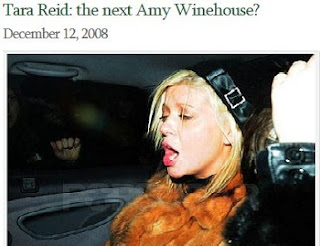 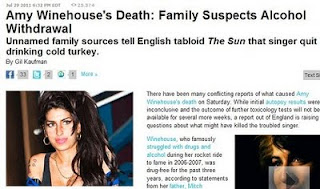 Winehouse was found dead in her home on July 23rd, the day after Breivik committed the Norway bombing and massacre.

In the movie, Dude Lebowski and his team bowl on Lane 23.  But lanes 23 and 24 (or 42) share the same scoring station—they are opposite sides of the same coin.

It's up to each of us to choose on which side we wish to play, or, ideally, to acknowledge and integrate the best aspects of both through the process of Individuation.

"Like the anima, the animus does not merely consist of negative qualities such as brutality, recklessness, empty talk, and silent, obstinate, evil ideas.  He too has a very positive and valuable side; he too can build a bridge to the Self through his creative activity...On this highest level he becomes the mediator of religious experience whereby life acquires new meaning."—Man and His Symbols, Carl Jung


In the film one of the dual aspects of the Dude's animus is represented by Walter Sobchak, the temperamental Vietnam vet who also has a loyal and piously religious side.

Did the Coen Brothers realize they were incorporating these deep elements into the movie, or was it simply Synchronicity at work silently in the background?


I tend to believe the latter when it comes to movies mainly because I regularly witness Sync working behind the scenes in my own life.

The Hanged Man and Childhood's End

The Hanged Man tarot card has now been played.

On 7/13/11 the girlfriend of multi-millionaire Arizona-based pharmaceutical company owner Jonah Shacknai was found hanging nude from the balcony of the historic Spreckels mansion where he lived in Coronado, CA.

Her hands and feet were bound.

In my two previous posts Those Crazy Twins and Lord Black and Lord White I identified the Divine Twins and the High Priestess tarot cards as revealed in current events.

The timeline came from an online article by Jan Wicherink entitled "What the Tarot is Telling Us About 2012".

Interestingly, Wicherink wrote that the last and most important Tarot card in the cycle of events leading up to the Great Celestial Conjunction of 2012 would be The Hanged Man.

Therefore, it was clear that prominent hanged man symbology should soon crop up in the news (the bound hands and feet being the giveaway).

One last card that reveals some interesting secrets about the End of Times and Second Coming of Christ, Card XII (12) the Hanged Man.  In card XII the Sacred Tree is depicted, the crossing of the ecliptic and Milky Way. The light radiated by the man’s head resembles the rays of the Sun. This Sun is placed on the Sacred Tree...the Sun on the ecliptic-Milky Way crossing.—What the Tarot is Telling Us About 2012

There is even more esoteric symbology in Crowley's version of The Hanged Man card in his Thoth Tarot deck.

Aleister Crowley is revealing that the Christian belief of the Second Coming of the historical figure Jesus Christ at the End of Times is identical to the death and rebirth of the Sun at the Great Celestial Conjunction.—What the Tarot is Telling Us About 2012


Another sync I noticed is that the name Shacknai is very similar to Shekhinah, a Hebrew word used to denote the "presence of God".

The Shekhinah is synonymous with the "Pillar of Cloud" that guided the Israelites out of Egypt.

Some believe the Shekhinah specifically represents the feminine attributes of the presence of God.
﻿
﻿

Both of these definitions resonate with the idea of the Second Coming and the Return of the Divine Feminine.

Similarly, the Biblical prophet Ezekial prophesied the Return of the Shekhinah in his vision of the Third Temple being built at the End Times (Ezek. 43:1-7).

The mansion's location in Coronado, CA may also hold symbolic significance in that Coronado is Spanish for "The Crowned One". 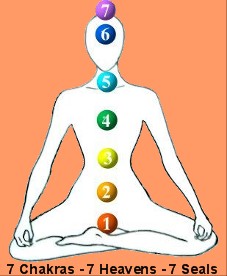 This correlates to the 7th and highest Chakra level, the Crown.

On 7/18/11, Shacknai's son passed away from injuries sustained from a fall down the stairs in the same mansion seven days earlier on 7/11/11.

The Kabbalah Society's description of the overall meaning of the 2nd Degree tracing board and its two pillars (as depicted above) coincides with the meaning of the Chakras and the Shekhinah:

The individual who embarks on the Second Degree is about to undertake some interior journey, an ascent through the soul and spirit. The Masonic Lectures assign characteristics to these two pillars which suggest they represent paired opposites: first, they are said to be a memorial of the Pillar of Cloud and the Pillar of Fire that guided the Children of Israel (by day and night, respectively) during the Exodus;—KabbalahSociety.org

﻿The unfortunate imagery of a young boy falling to his death down a staircase could also denote something else.

Perhaps an ill-fated signifier of the beginning of the end of the Aeon of the Child?

This event also happens to tie in with my conspiracy theory regarding the Powers That Be and Phoenix, Arizona.  Shacknai's business is based in Phoenix and his deceased girlfriend Rebecca Zahau was also from Phoenix.

In my previous post I created the following illustration to show how Da Vinci's Vitruvian Man figure can be overlaid atop a map of Arizona to find the power points.


Note that the Spreckels Mansion in Coronado, CA is located on an exact straight-line path connected to the Left Arm of the Vitruvian Man figure.

I also circled Quartzsite, AZ on the map (it's in the same vicinity of the Left Arm).

Quartzsite has been all over the news recently for illegally arresting citizens and trying to implement martial law.

The locations imply that these events are yet more activations of power points connected to Arizona.
Posted by Sibyl Hunter at 6:26 PM 4 comments:

The Honey is the Money 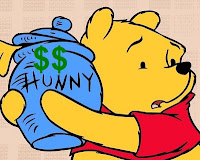 Is Winnipeg the ruling class city depicted on the famous United Nations mural?

I know I previously disavowed my conspiracy theory hat.  But what good is an old hat if you can't take it out of the closet and rock it every once and a while. 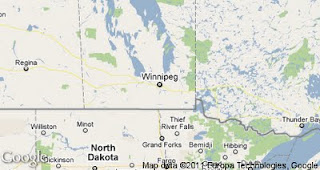 Admittedly I've been heavily influenced by the The Sync Whole guys, but I wasn't looking for a Winnipeg connection.

I just ran across it while doing some research on my theory that Phoenix, AZ (and also possibly Atlanta, GA) are the U.S. headquarters for the Powers That Be.

The mural (below) hangs in the Security Council Chamber of the United Nations building in New York.

It seems to depict some one's warped future ideal of a Utopian society.

In contrast to the Working Class villagers at the bottom, the Ruling Class at the top of the mural is shown living in a City steeped in wealth, architectural order, art, science and culture.

Starting at the Top Left of the mural, we see the image for Wealth. At first glance, I immediately thought the people were pouring Honey into a pot.

The U.N. website says they're "weighing out grain for all to share".  But per Google lots of folks think it actually depicts Gold being melted to turn into Money. 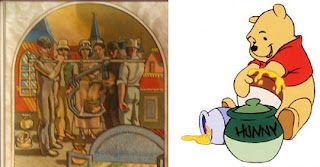 Then it occurred to me...if Winnipeg (symbolized by Winnie the Pooh whose greatest commodity is Honey) is in charge, then technically Honey=Money.

For additional proof that the city is meant to be Winnipeg I noted the Draftsman and Builder figures at the Top Middle of the mural.  They are clearly planning and creating the cityscape in the background. 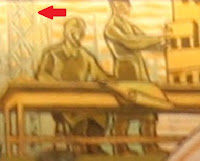 Directly over the Draftsman's shoulder is a large tower that strongly resembles the Tower of Hope on Winnipeg's Canadian Museum for Human Rights (currently under construction).

Next, there is an image of an Artist standing next to an animal Sculpture he has created.  This could be a reference to Winnipeg's world famous Leo Mol Sculpture Garden in Assiboine Park. 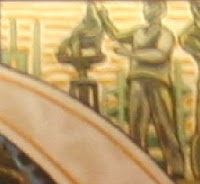 The mural's central figure is the Phoenix bird being reborn as it rises up from out of its own lifeless ashes. 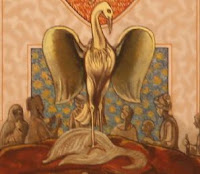 Behind the bird is some kind of starry portal that people are entering.  Beneath the mound the bird is standing on a dragon-like beast hides underground.

The real-world mound, or foundations, on which the Phoenix stands are the cities of Phoenix, AZ and Atlanta, GA.

Atlanta was identified by @strangeye (along with the cities of Winnipeg and Phoenix) as the Keystone of the Royal ARK:

Lo and behold, the City Seal on the City Flag of Atlanta, GA is...a Phoenix.

While Phoenix, AZ is literally named after the mythic bird, we can see how Atlanta is symbolically representative of the Phoenix.

The City of Atlanta was rebuilt after being burned to the ground in 1847 during the American Civil War.

Besides the intergalactic star portal behind the Phoenix, another weird image in the mural is in the town scene.

People dance around a huge Maypole under a U.N. flag, but some of the kids (apparently produced by this fertilization ritual) have blue and green skin.

We see the same apparent inter-species mixing in the mural's Top Left corner where a partially green couple are dancing.

Sufficeth to say, this is not my dream of a bright and happy future.

However, since we choose our own futures we can observe these twisted fancies of others without either lending our energy to nor fearing them.

(Note: the Synchromysticism Forum has an interesting thread about the creepy mural).
Posted by Sibyl Hunter at 10:13 PM 5 comments: