Those Crazy Twins—The Calm Before the Storm

News of the Winklevoss Twins' settlement with Facebook founder Mark Zuckerberg is another synchromystic marker on our road map to awakening. 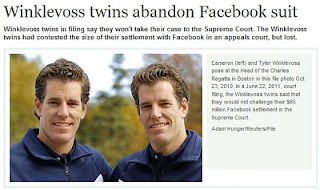 35 Gemini. The Divine Twins, one of whom was fathered by Jupiter/Zeus thereby making him immortal while the other twin remained mortal.  This is the Dual Nature of Man. 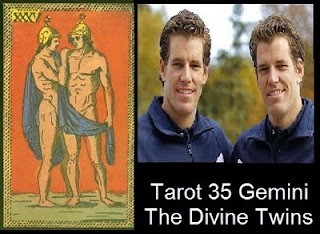 In ancient Rome The Divine Twins were known as Castor and Pollux.  Synchromystically, this recalls the movie Face/Off.

Nicolas Cage plays Castor Troy, and John Travolta is his foil and arch nemesis Sean Archer.  They are "Twins" in the sense that in order to defeat each other, they must first become each other by altering their faces through plastic surgery.

The Greek word "Castor" translates as "Beaver".  In the movie The Beaver Mel Gibson plays a man whose Alter (or Twin) Ego awakens and emerges as a beaver puppet to save his life.  It is directed by and co-stars Jodi Foster, cinematically one of the first people to make Contact. 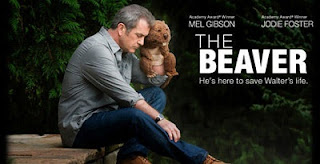 In a nice sync wink the movie poster (Above) shows Gibson wearing a PeriWINKLE blue-colored shirt. On the Greek version (Below) he is lying on a sheet of the exact same color. 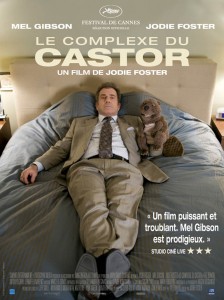 Incidentally, the name of Travolta's character "Archer", or bow man, synchs to Dave "Bowman", our awakened Jupiter starbaby  from 2001: A Space Odyssey and 2010: The Year We Make Contact.

From a Fairytale-as-Myth perspective the Winklevoss Twins also resonate the story of Rip van Winkle who awoke after having slept for 20 years. 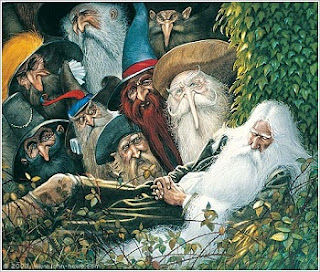 "To be a Rip van Winkle, is to awake suddenly to profound changes in one's surroundings. This may be due to physical absence or to absence of mind."—Wikipedia

The Winklevoss Twins are "resting" their case after 3.5 years.  Maybe this signifies our Collective Consciousness completing its final stage of slumber before ultimately waking up.  Perhaps there is also a connection between their 3.5 years and Rip van Winkle's 20 years. (NOTE: 3.5 years = 42 months. 42 is the Jupiter number).


In the Bible, 3.5 years of days is linked to a pair of prophetic Twins known as the "Two Witnesses" (the Sun and the Moon).  Revelations 11 says that after the Two Witnesses have finished their testimony they will die for 3.5 days.

The people of Earth will rejoice during this time because they will no longer be tormented by plagues and weather anomalies (sound familiar?).  This temporary "death", or "slumber", could correlate to the Sun's sunspot cycle inexplicably becoming dormant.  Similarly, perhaps the Moon's figurative death occurred during last week's full lunar eclipse.﻿

"But after the three and a half days the breath of life from God entered them, and they stood on their feet, and terror struck those who saw them."—Revelations 11:11

Likewise the number 20 in the Bible also denotes a waiting period, or the act of Expectancy.

"Twenty is the double of ten, and may in some cases signify its concentrated meaning. But its significance seems rather to be connected with the fact that it is one short of twenty-one, 21 - 1 = 20; that is to say, if 21 is the three-fold 7, and signifies Divine (3) completion as regards spiritual perfection (7), then twenty, being one short of 21, it would signify...expectancy."—Biblestudy.org

One of several references to a 20-year period appears in the book of 1 Samuel. The Israelites abandoned their idols and false gods and spiritually "rebuilt the Ark after 20 years" by returning to worshipping the one true God.

The Ark remained at Kiriath Jearim a long time—twenty years in all.  Then all the people of Israel turned back to the LORD.—1st Samuel 7:2-3

This syncs to a recent news story (see video above) of a guy who just completed building a biblical scale replica of Noah's Ark in the Netherlands.  He's loaded the boat with pairs of plastic animals—"Pairs" being another play on "Twins".

All these crazy Twin syncs are converging to let us know that the waiting period is about to be over.  It's Business Time ya'll.

Fav line from above song:  "Two minutes in heaven is better than one minute in heaven" :-)